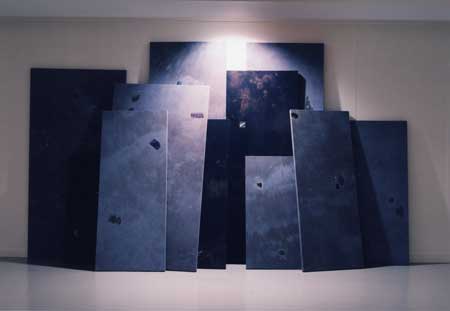 Within the panel works of Maruyama Yoshiko lies a sensitivity which glides upon a borderless informational environment creating a global awareness of space. This is feedback through a memory circuit that starts with a humble abode, including one's physical presence; it is quite different from the images upon the television screen. The panels imply the earth's atmosphere seen from outer space, upon which events float by in fragments. This simple installation, which suggests changing shoji screens, sliding doors or tatami mats, weaves a subtle dimension of shadowed planes between the overlapping. When standing in front of “the door”, a door that comes from a differing paradigm to one that closes and opens, intimations are heard of the following haiku by Basho;
Farewell
To my humble abode.
It is now time to move on.
Echoes of this haiku flow by the portholes of a spacecraft and ebb into the Cosmic ocean.

(Extract from the essay)